Next
Push button for menu

The Hanlin Funeral Home was founded in the spring of 1928. William (Bill) and his wife Florence Hanlin purchased the Huston Funeral Parlor from Mr. Lee Huston. Bill was employed as an embalmer/funeral director/Manager for Mr. Huston who at the time operated two funeral parlors in Tuscola County. He operated the Huston Funeral Parlor in Caro Michigan, (today known as the Ransford Funeral Home) and the parlor in Millington that the Hanlins purchased in 1928.

Little did the young Hanlins know what lay ahead for them or the future of our country, purchasing the funeral parlor just one year prior to the "Great Depression".

They forged forward, giving the Funeral Parlor a new stately name, "HANLIN FUNERAL HOME". Bill and Florence began not only introducing to the Millington community the concept of a "Funeral Home" but they forged forward with a philosophy that they couldn't have possibly even conceived that 87 years later would still exist: "Serve others as you would want to be served."

As the business grew, so did the demands of the community they served. So, in the mid-1940s, Florence received her Funeral Directors License, which would allow her to be more than just an assistant to her husband. The concept of the "Funeral Home" was growing rapidly also, not only in Millington but throughout the country. Families were requesting more and more that services be held at the funeral home rather than back at the residence of the deceased. So in the fall of 1948 the Hanlins purchased property a block from State Street on West Main Street and began plans for a new state-of-the-art funeral home for the community, with construction being scheduled for the spring of 1949. And so it came about that the Hanlin Funeral Home, which had now been serving the community for 21 years, was moved from 8625 State Street, the original location, to its new and current location at 4823 West Main Street. 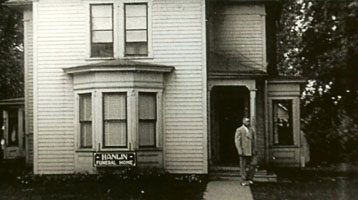 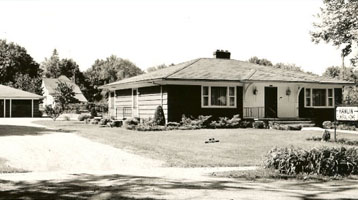 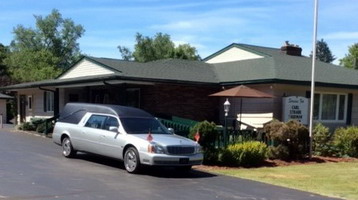 In the early summer of 1955 Bill and Florence's youngest son Jerry W. Hanlin would return home form mortuary school and join the family profession. The Hanlins have now been serving the community for 27 years. In the fall of 1962 Bill and Florence decide to take a less active role in the business. Though making themselves available to assist Jerry and his wife Marion, they decide to pass the torch to the family's second generation to continue to serve with the strong foundational philosophy set forth in 1928, "Serve others as you would want to be served" and the Hanlins have now been serving the Millington community for 34 years.

Time progresses and many changes come about. The facility in 1977 underwent a complete change as the community needs and service requests began changing . The funeral home is given an entire new look for the community, the entryway is changed, a garage added, and many interior changes take place. But the philosophy remains sound and is still the foundation, and the Hanlin family has now been serving the community for 49 years.

Then in January of 1997 another change comes once again. Jerry and his wife Marion have now been actively serving the community for 35 years and the business is now in its 69th year. As Jerry's parents Bill and Florence had done, Jerry and Marion now once again pass the torch to the family's third generation, Dale & Pamela Hanlin to continue on the family business and continue to uphold the philosophy that has come to be very well respected throughout the Millington community and throughout the county as well. As times are changing people begin to see the rapid decline of family-owned funeral homes which are becoming a thing of the past. Today 2016 and 88 years later the Hanlin Funeral Home is still owned and operated by its founding family. Dale and Pam Hanlin are the family's third generation to continue on the family profession and still holding strong to the 88-year-old philosophy, "Serve others as you would want to be served."

Today Hanlin Funeral Home holds an honor that they are very proud of, they are the oldest family-owned and operated funeral home in Tuscola County, and are the oldest family-owned business in the community of Millington. Will there be a fourth generation? Maybe, but until then Dale & Pam Hanlin and their support staff will continue to, "Serve others as you would want to be served."